How to protect the boardroom monitors from prying eyes

How to Protect the Boardroom Monitors from Prying Eyes

Have you ever been to a high-security military or intelligence office building? Typically, they don't have any windows, and there is a good reason for this -- they do not want to be susceptible to prying eyes from the outside. In today's corporate environment, the need to protect data from increasingly more effective corporate espionage techniques is a major concern for chief information security officers (CISOs) and other property owners, as well as for the architects and general contractors who create modern office buildings. Even putting aside espionage concerns, open plan offices with glass walls promote transparency and collaboration but also make data privacy a major problem.

Signals Defense, a company that has been applying its patented technology to help the US intelligence community and corporations around 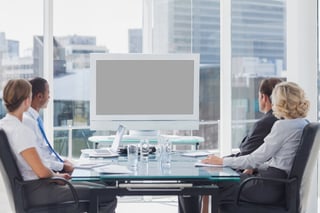 the world keep their buildings and data safer for 17 years, now has a solution to the "office fishbowl" problem. It's called Casper Cloaking Film, and it can be applied to glass walls to obscure the digital screens within to those on the outside. How the technology works is confidential, but effectively the cloaking film blocks the wavelengths of light emitted by LCD and LED screens, while the people and objects in the room remain visible. So an office can retain the open and collaborative environment deemed so important to modern workplace culture but protect data privacy at the same time. In today's increasingly stringent regulatory environment for investment banks and other financial institutions, Casper Cloaking Film could be a godsend, as even within teams that handle confidential private-side information, only the people working directly on any transaction should have access to the data, yet all investment banks have open plan offices with glass wall conference rooms! Casper Cloaking Film is clearly the answer to enforcing the strict security regulations required in today's post-crisis regulatory environment.

Casper Cloaking Film is the only technology of its kind and is intended for LED and LCD screens that are greater than 40 inches in diameter. In order to protect your boardroom monitor privacy, contact Signals Defense today.