Distributed antenna systems or DAS are a must-have in massive buildings with poor reception. They improve public cellular wireless network coverage indoors, ensuring that people can get strong and reliable signals wherever they are in the building.

Though cellular phones have become a lot more than just “phones” these days, they still need to perform the basic function of making and receiving calls without disruption. While this typically isn’t an issue when you’re outdoors or even inside your home, it can be difficult for wireless signals to penetrate office buildings, thereby leading to spotty or inadequate coverage in certain areas. Dropped calls and poor connections can lead to unhappy clients and possibly even lost profits.

Cell phone coverage can also be an issue in heavily populated facilities or venues where thousands of people may be attempting to access the phone network at once. Sports stadiums and convention centers are just a few of the types of facilities that could benefit from more reliable cell coverage, while also improving the fan and attendee experience.

In buildings or venues with poor cell service, a distributed antenna system can serve as a valuable addition.

Think of it like this: If you just have one wireless router in your home, then Wi-Fi-enabled devices located closest to the device get the strongest signal and best connectivity. There may even be a few “dead spots” in your home that get a very spotty signal or can’t pick up the signal at all. To resolve this, you can either move your wireless devices closer to the router, which isn’t always convenient, or you can add additional routers to your home to ensure a strong Wi-Fi signal throughout.

Distributed antenna systems work the same way. However, instead of Wi-Fi routers, DAS systems use strategically-placed antennas to boost cell coverage where they are weakest.

Distributed antenna systems typically consist of a network of antennas that receive signals from base building service or an outside tower. A distribution system then transmits this signal throughout the venue. This reduces spotty reception when you have a properly designed and implemented DAS system. As a result, tenants, customers, guests, and employees can enjoy consistent, uninterrupted mobile signals anywhere in the building.

DAS networks have two primary components: the signal source and a distribution system.

A DAS distributes cell coverage and ensures that a mobile signal is available anywhere in a building. But unfortunately, its function can also be its weakness: signals from DAS systems of neighboring buildings can collide and interfere with one another. This is what happens when you’re in a boutique, for example, and your phone catches the WiFi signal from the cafe next door.

The wireless ecosystem becomes too crowded when there are many DAS systems in one area. These problems emerge as a result:

So when faced with the problem of distributed antenna systems that work all too well, how do you correct interference and attenuation? Signals Defense offers a solution: RF window films.

The Role of Window Films in Distributed Antenna Systems

These window films can attenuate signals from outside the building, eliminating problems regarding interference. At the same time, they can help prevent outsiders from detecting signals inside the premises, boosting cybersecurity for users that handle sensitive information.

Finally, window films help control how signals are distributed inside buildings that use Hybrid DAS or whose occupants have installed multiple independent DAS networks. For example, tenants who have invested in a private DAS system can isolate the cell signal within the rooms or floors they lease by installing window films on the glass windows, doors, and walls.

While distributed antenna systems help enhance cell service within a building, one thing they cannot do is control what is happening outside of the facility. That’s where DAS Shield, a protective type of window film, can help. DAS Shield can be applied to nearly any type of window and it works to separate a signal from a distributed antenna system and stays within your facility. These films can also reduce Wi-Fi signal loss, which helps further minimize wireless interference, safeguard systems from hackers and enable quality coverage throughout. Essentially, DAS Shield helps reduce any external RF interference on the outside, thereby helping a facility's distributed antenna system work up to its full potential.

Contact Signals Defense today for more information on distributed antenna systems and how DAS Shield can help improve coverage throughout your facility. 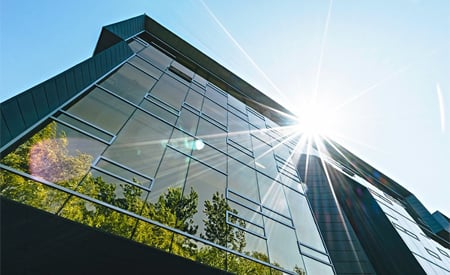 A Case Study of DAS Success